Skip to content
Here's a reminder that Sunday, 14 March is Mother's Day. Click the link for the cards.
View basket “Cello” has been added to your basket.

A greeting card for a word nerd friend featuring the ampersand symbol and text explaining the etymology of the punctuation mark from ‘and per se’ to ampersand.

Ampersand is a greeting card for a word nerd friend. It features the symbol and an explanatory text:

‘The ampersand is over two thousand years old. It was made by joining together the two letters of the Latin word et, which means ‘and’. When the ampersand began to be used in England, scholars explained that the symbol was a complete word per se. Soon, ‘and per se’ became ampersand.’

And that is the interesting story of how this punctuation mark came into being.

But there is more, surely? And yes there is.

It’s not world-shattering news, but a lot of people like the ampersand. Try it yourself – ask anyone you know (anyone who won’t look at you sideways for asking, that is) and see what they say.

I’ll bet they say that they like it. It might be the odd shape, or the fact that it is such a useful abbreviation. Whatever it is, people like the ampersand.

I’ve had an affection for the ‘curly and’ since I first saw it as a young boy and wondered exactly what it was.

For example, compare Smith and Jones and Smith & Jones.

Is there any doubt that Smith & Jones are in a closer relationship than Smith and Jones?

Smith and Jones could be just two people whose names appear after each other on a list. They could be privates in the army and the sergeant asks Smith and Jones to go clean the toilet block.

Smith & Jones, on the other hand… they sound like they are in business together. Perhaps they make hair tonic (actually, does anyone still make hair tonic?) or hand-built bicycles?

Apparently, there are ampersands in the graffiti in the ruins of Pompeii, the Italian city that was destroyed by ash in the eruption of Mount Vesuvius in 79 AD.

As I said, the ampersand is what you get when you join the two letters of the Latin word et (which is Latin for ‘and’) together. And when the symbol was adopted into the English language, scholars taught that it meant the word and ‘per se’… meaning that was a word and it didn’t need anything adding to it to complete it.

From there, ‘and per se’ became ampersand.

And perhaps the most famous Latin words that include ‘et’ and have survived down to the modern age are the words Et tu Brute? spoken by Julius Caesar in Shakespeare’s play of that name. If you haven’t read the play, the words were spoken by Caesar as he is being stabbed by Brutus, one of the closest of his supposed friends and allies.

Et tu Brute? means of course, And you too Brutus?.

The ampersand and the name ‘ampersand’ is used in many languages, but there are a few notable exceptions. For example, in French it is esperluette and in German it is kaufmännisches.

In Hungarian it is jel, while the most authentic to the original idea of joining the letters of ‘et’ together is the Finnish ‘et-merkki’, which means ‘et mark’. 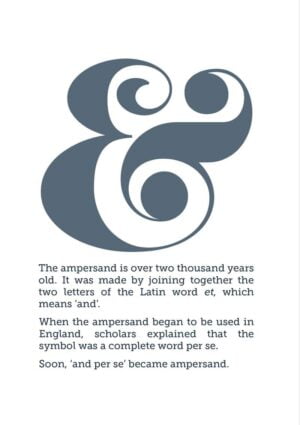