A Romantic greeting card featuring a teddy bear lying on its back on the grass staring up at the sky with books near it, including one entitled 'A Bear In Love'

A Romantic greeting card featuring a teddy bear lying on its back on the grass staring up at the sky with books that it had been reading, by its side, including one book entitled ‘A Bear In Love’.

How the teddy bear got its name is well documented. It is named after President Theodore “Teddy” Roosevelt for what occurred on a hunting trip that in the 21st Century would be condemned as inhumane.

What happened is that the President failed to shoot a bear while all the other members of the party had got theirs.

To make fun of Roosevelt, some of the party captured a bear and tied it to a tree. They then called on Roosevelt to shoot it. The joke was of course that he couldn’t miss – in contrast to his prowess up to that point.

The president refused to shoot and the episode was recorded in a political cartoon in the Washington Post. Roosevelt was of course the hero because of his unwillingness to shoot a bear tied to a tree.

That reflected the politcical atmosphere at the time, with the fair-minded president beset by men with lesser morals. 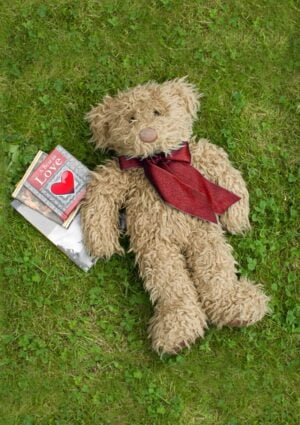