A romantic greeting card featuring bluebells in a jug with text ‘You are Beautiful.’

Bluebells greeting card featuring bluebells in a jug with text ‘You are Beautiful.’

These are Spanish bluebells, and there is a story behind that. The Spanish bluebell was introduced into this country on purpose but it has run wild and it hybridises with the English or ‘common’ bluebell, which is now recognised as a threatened species.

When one walks through a bluebell wood, with a carpet of bluebells covering every inch, a battle for survival between the two species is raging in the undergrowth.

So how can you distinguish the Spanish bluebell from the English bluebell?

Well the most obvious way is that the flowers of the English bluebell only grow on one side of the stem, which causes the stems to lean over in a graceful arc.

In contrast, the flowers of the Spanish bluebell grow all around the stem, which causes the plant to grow more upright.

What more can one say than that the English bluebell wood prospers.

The Law and Picking Wild Bluebells

Schedule 8 of the Wildlife and Countryside Act 1981 lists plants that are protected under the Act.

English bluebells are listed in Schedule 8 as being subject only to Section 13(2) of the Act only. This section states that any person who sells, offers or exposes for sale, or has in his possession or transports for the purpose of sale, any live or dead wild plant included in Schedule 8, or any part of, or anything derived from, such a plant shall be guilty of an offence. And also that anyone who publishes or causes to be published any advertisement likely to be understood as conveying that he buys or sells, or intends to buy or sell, any of those things, shall be guilty of an offence.

So picking English bluebells without any intention to sell them is legal in the UK. But picking them for sale is illegal.

Whether or not it is illegal to pick bluebells from the woods, one sees the cultivated variety of the Spanish bluebell for sale in flower shops. And it was from a flower market in Leeds in Yorkshire that I bought the ones in the jug in the card. 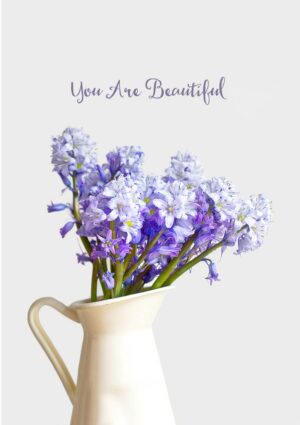