Back from the brink is an anti-Brexit greeting card featuring a poster in the style of an advertisement for a play or film.

Back From The Brink

Back from the brink is an anti-Brexit greeting card featuring a poster in the style of an advertisement for a play or film. The text reads as follows. Deliverance Productions presents Back from the Brink. How Britain was saved from Brexit.

Oh how that hope seems dashed to pieces now. It was dashed to pieces on the result of the General Election in 2019.  That was the election that gave Boris Johnson’s Government a sufficient majority to carry out its mandate.

So it is with a heavy heart that I write this text knowing that Brexit has happened. Now is the time for the conclusion of the negotiations. And what will that bring? Will be be pulled back from the brink of ruin? In other words, is there still a risk that Britain, having exited the EU, will storm off in a huff with no deal at all?

What do we imagine is beyond the brink? Financial ruin for the country was mooted even before the referendum. That was countered with the message that ruin was not on the cards and that talk of it was ‘Project Fear’.

The Financial Future Is Anyone’s Guess

In the longer run, say five or ten years, I think it is anyone’s guess. Very few people foresaw the 2008 financial crash. That included the CEOs of banks and investment houses. So how can one be certain of what the financial landscape will be like five years from now. If there is one thing we the human race have absorbed it is this. Change comes, and things do not stay the same. Furthermore, change will come more and more rapidly. Technology may revolutionise and upset lives and drive some business models to the brink. We are seeing it now with the end of the High Street. Well, the High Street may regain its customers, but we are moving to an age where no one would happily bank on an outcome. And that in itself is bad for business and stability.

Back From The Brink?

So what is this brink that is staring us in the face? It is the short term brink, the first year or two. The worry is that we will not have the wherewithal thereafter to prosper. That is, Britain could fall into a chasm in that first period and find itself marooned on a rocky ledge for years to come. So, with Britain formally our of the EU, look hard at this Brink anti-Brexit greeting card and pray that things work out. 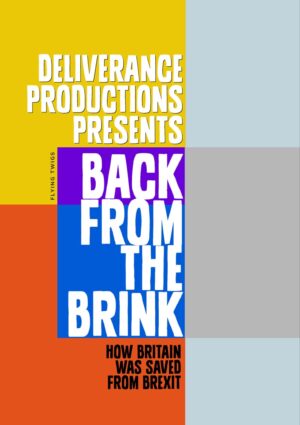