It’s a rapidly changing world. What seemed an immovable part of the culture in one era because obsolete in the next. It makes you wonder whether there is going to come a time when storks will not be associated with birth and new babies.

And yet tradition does not cave in so easily when it has a place. And that is true when technology supposedly overtakes old ideas and means of interacting with the world For example, books and pens are making a comeback.

In the same vein, people are still as romantic as they ever were. And they are still drawn to heartfelt emotions – and what more so that with the birth of a new baby. The myth of the stork lives on and people cherish it.

Always In Demand, Its Work Is Never Done

As we know, a stork’s work is never done. There will always be another baby to collect, although it is not clear from where storks collect them. Be that as it may, they do collect them. And their very first task is to put the new born baby on a towel. Then as dextrous as only a stork can be, it folds over the towel and ties knot. This is an essential step because it does not want the baby to fall out of the towel on its journey. The fact is that although there have been untold millions of such deliveries, a baby has never been known to fall out of a towel en route to its new parents. This particular stork has plainly made a successful trip because it is able to congratulate the new parents.

Another skill that storks exhibit that is rarely talked about is their directional skills. Think about it, how many times has a stork delivered a baby to the wrong parents? I can tell you that it has never happened. In all the years that storks have been doing this job they have never mislaid a baby. Chalk up one more for the success rate of storks. 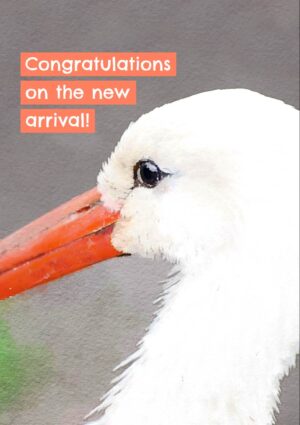