An Inspirational card featuring a cello with a quote from Pablo Casals that ‘Music is the divine way to tell beautiful, poetic things to the heart’

Casals is an inspirational card featuring a cello against a plain purple background with a quote from Pablo Casals that ‘Music is the divine way to tell beautiful, poetic things to the heart’

Pablo Casals is a favourite for quotable quotes. When asked why he was still practising in his nineties, he responded that he was still learning. Coming from a man who was world renowned as a cellist and conductor, this was a wonderfully candid thing to say.

Casals was born in Catalonia in Spain and was gifted from an early age, playing the violin, piano and flute at age six. When he was seventeen years old, the composer Isaac Albéniz heard him playing cello in a trio in a café. In consequences, he gave Casals an introduction to the private secretary to the Queen Regent of Spain. Following that engagement he travelled to France and worked there, playing with various orchestras. Then on his return to Spain at age twenty-one he became the soloist with the Madrid Symphony Orchestra. Thereafter he played with leading orchestras around the world. And he played for many world leaders, including two American presidents.

When the Franco came to power, Casals quit Spain and would not return there until after the dictator’s death and the end of his regime in power. Furthermore, he refused to appear in countries that recognized the Spanish government.

Casals was also a composer. His most famous composition is La Sardana, for an ensemble of cellos, which he composed in 1926. The sardana is a Catalan musical genre and a dance danced in a circle, and therefore dear to Casal’s heart. 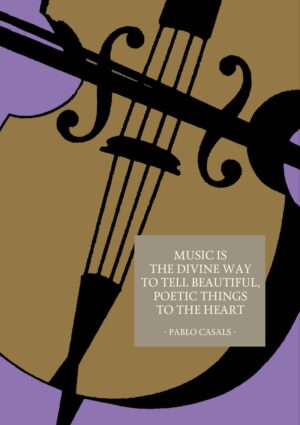