Skip to content
View basket “Sweat” has been added to your basket.

An inspirational card featuring a quotation from the British Prime Minister David Lloyd George, ‘Don’t be afraid to take a big step if one is indicated. You can’t cross a chasm in two small jumps.’

Chasm is an inspirational greeting card using words to make the point. ‘Don’t be afraid to take a big step if one is indicated. You can’t cross a chasm in two small jumps.’  The words are a quotation from the British Prime Minister David Lloyd George.

The word chasm comes from the Greek khasma, meaning a gaping hollow. However, the first written recorded use of the word in English dates from the late 1500s. Which begs the question of what word people used prior to that if they did not use this word?

The answer is probably lost in the mists of time, like so many things.

A Deep Fissure In The Surface

A physical chasm is a geological feature of a deep fissure in the surface of a celestial body. So it can be a fissure in the surface of the Earth or of the Moon. When interplanetary spaceship reach Mars, there may be chasms there. In every case, what makes a chasm is its sheer depth, the steep side, and the width. It is the combination of those that makes it difficult to cross.

And it is not only fissures in the naked rock of the Earth that fall into this description. It can also be fissures in the surface where there are deep ice fields. Moreover, it can be chasms that cannot be seen from land. That is it includes fissures on the sea bed.

The geological feature that comes to mind is the Marianas Trench in the western Pacific Ocean south of Japan. And it is huge. It is more than 2,500 km long and 70 km wide. At its deepest point it is two kilometres deep.

Lloyds George was a politician, and used to bridging the gap to arrive at a compromise. And as he said, do not be afraid to take a big step if one is indicated. You can’t cross a chasm in two small jumps. 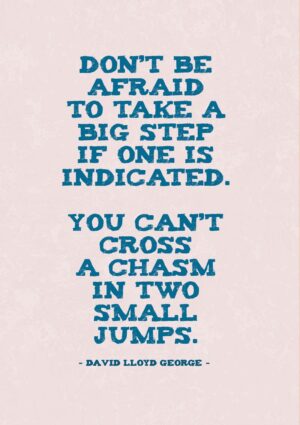