A humorous and romantic card featuring a cockerel with a magnificent red comb, and text that reads, ‘I combed it specially for you.’

Comb is a humorous and romantic card featuring a cockerel with a magnificent red appendage, and text that reads, ‘I combed it specially for you.’

The word is, of course, used here with a double meaning. There is that which sits on the head of the cockerel and that with which a person combs their hair.

It’s not hard to see that a cockerel’s comb is toothed in much the same way as a comb for the hair. And the origin of the word is from the Sanskrit word for tooth. From that came ‘toothed object’ and so on through to the modern meaning of the word.

An alternative word for a cockerel’s comb is a cockscomb. And a variation of that word is coxcomb, which also means a foolish, conceited person.

That’s why court jesters wore caps with combs on them – so that they could make fools of conceited people to entertain the court.

Of course, the fleshy comb on a cockerel’s head is designed to attract mates – and the more it can stand up and swell, the more attractive it is.

And the reason that a cockerel’s comb swells is that it fills with a substance named hyaluronan. It is an unusual substance in that the molecule can be very large, with its molecular weight often reaching the millions.

And it accumulates in response to testosterone.

We humans have about 15g (half an ounce) of hyaluranon in our bodies. Most of it is in our eyeballs and our skin. It’s the body’s natural lubrication, and it degrades naturally and you replace about a third of it daily. 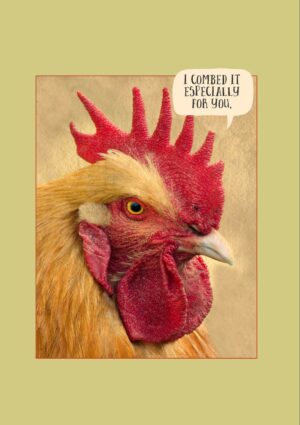