Delight is an Inspirational card featuring three feathers and a quote from Kahlil Gibran on the delight of touching the earth.

Delight is an Inspirational card featuring three feathers and a quote from Kahlil Gibran. The quote is ‘Forget not that the earth delights to feel your bare feet and the winds long to play with your hair.’

Gibran seems to capture the feelings that are so easily lost in the day to day experience of living.

We chose delicate, golden feathers to conjure up this mood that is so close to the essence of a person.

Kahlil Gibran was born in 1883 in Lebanon into a Maronite Christian family. He and his mother and brothers and sisters moved to the United States when he was twelve years old. For whatever reason, he father did not follow them. He had been imprisoned for embezzlement but released the year before the family emigrated. And his father was his mother’s third husband, so there is more to the story, whatever it is.

In The United States

Once in the United States he began to draw and write. His drawings and paintings showed talent but it was his writing that made him famous. His book of poetry The Prophet has been translated into most languages in the world and has sold many millions of copies. The recurring and constant theme is intimacy. He speaks of the deep affection and love that is the true hallmark of life and living.

On the subject of delight, this quote speaks of the bond between sorrow and joy. 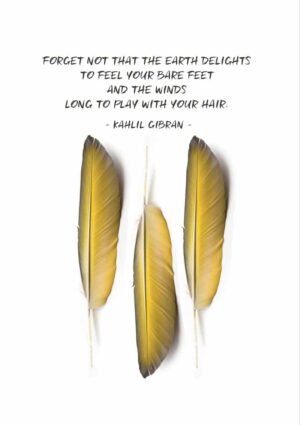