A Get Well card featuring a Dogue de Bordeaux looking decidedly down in the dumps – it’s a dog’s life – and text ‘Sorry You’re Not Well’.

Dog’s life is a get well card featuring a Dogue de Bordeaux looking decidedly down in the dumps. Does it look miserable? How can one tell? It could be saying it’s a dog’s life. And then there’s the text ‘Sorry You’re Not Well’. That explains it: It’s a look of sympathy.

The Dogue de Bordeaux has so many other names that it probably takes the top prize for alternative names. Besides Dogue de Bordeaux it is also known as a Bordeaux Mastiff, French Mastiff, or simply Bordeaux dog. Moreover, that leaves aside the fact that at one time there were large and small breeds that were called the Dogues and Doguins, respectively.

Whatever the name, the breed can trace its ancestry back to the 1300s. And yes, it does indeed get its name from the city of Bordeaux in France where it was originally bred.

But what about the origin of the phrase ‘It’s A Dog’s Life’? Given how dogs are pampered, it makes us wonder how the phrase came to mean an unhappy and hard life?

Our guess is that it originated before dogs were regarded as pets. That would be the time when they were expected to earn their keep and were kept outside in all weathers.

Times Turn Fashions On Their Head

Nowadays we have turned this on its head. when we see a guard dog chained up and living in a leaky kennel, this is social shorthand for a callous owner. How times have changed and no longer is it a miserable life for dogs.

If you would like to read more about the Dogue de Bordeaux, read about its history and its health issues in the dog with the mournful face. 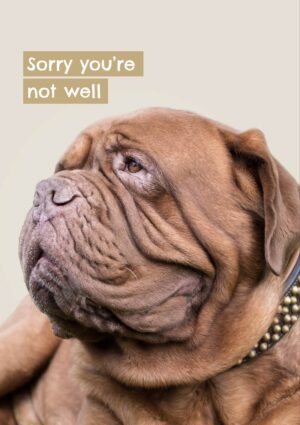