Fields is an anti-Brexit greeting card featuring a mockup of a World War II Ministry Of Information leaflet about field labour.

Fields is an anti-Brexit greeting card featuring a mockup of a World War II Ministry Of Information leaflet about field labour.

It is a humorous, spoof, satirical card. And it has some choice words to say about those who shirk their duty. For example, it is written in heavy black text on a light buff background. And the whole is surrounded with a thick red border to make the point more striking and authoritative. That is to say, it is authoritative if one buys into the Brexit package.

Moreover, it cuts the ground from under the feet of those who support Brexit by telling the poor unfortunate people of the UK that they must now dig in the fields.

It says that the British Field Act (a satire because no such Act exists) states that any man without a valid exemption certificate covering post-Brexit fruit picking in the Lincolnshire fields is required to go to his local food office straight away. There he will be given instruction in field labour. Moreover, anyone failing to attend is liable to be arrested. So don’t be a shirker!

The text reads as follows.

British Field Act concerning post-Brexit fruit picking. Any man without a valid exemption certificate covering post-brexit fruit picking in the Lincolnshire fields is required to attend at his local food office immediately, where he will be given instruction in field labour. Failure to attend is an arrestable offence. Don’t be a shirker! Order number 74/2019

The term ‘arrestable’ offence is now obsolete (except in Brexit land). That is to say, while it was made obsolete, it was replaced by a set of criteria for offences as defined under the Serious Organised Crime and Police Act 2005. The criteria are designed to encourage a police office to ask whether it is necessary to arrest the person.

The advantage of the new approach is that it gives the police some discretion depending on the situation unfolding before them. On the other hand the disadvantage is that is can cause delay where previously there would have been none. 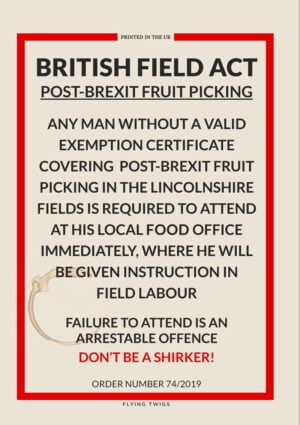