Flaunt It is a greeting card to inspire, a crowned crane resplendent in its finery with text ‘If You’ve Got it, Flaunt It!’

Flaunt It is a greeting card to inspire those of us who want to strut our stuff, featuring a crowned crane resplendent in its finery with text ‘If You’ve Got it, Flaunt It!’

In fact, one can revel in the thought that some things are unknown and will never be known. Is it not somehow better than that every bit of knowledge will be tracked down or could be tracked down? One could almost say, if one has it but one doesn’t know the origin, flaunt it!

There is an analogous verb to strut, which is of course, to walk in a self-important manner. And that brings us to Solomon, or Kohelet, son of David. It was he who is recited as saying Vanity of vanities, all is vanity. And he continues, what does it profit a man to toil under the sun? And concludes that a generation of men comes and goes but the earth remains and endures forever.

Well that was then. Now we are faced with the prospect that the earth will be so pummelled about that it will not endure forever. That is, it will not endure in any state that we consider pleasant. And while you may think this is about climate change, but that is not so. This is simply talking about polluting the planet. This is about treating the earth with respect irrespective of whether the planet is in danger from a changing climate. 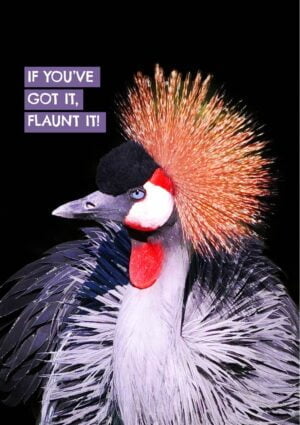