Well that’s sheep knowing other sheep. What about farmers and shepherds recognising which sheep are theirs? In former times, knowing which sheep belonged to who was important also on Common land. Common land was land that was owned by the village as a community. The village made communal decisions about planting and grazing, including when sheep were let out to graze. And when that happened, sheep from different flocks mixed freely.

Then the Enclosure Acts of the 18th and 19th centuries fenced off the Commons and passed the ownership from the local community to one farmer. Some called it highway robbery; some called it the march of progress.

But whether for strays or whole flocks, how was a farmer to know which were his sheep? From close up he would know them by their lug marks – distinctive cuts to the lug of their ears. But from far away, the farmer or the shepherd needed a different method. And that method has lasted through the ages until today.

If you have seen sheep in the lowland fields and on the hills in the UK you may have noticed the paint marks on their fleeces. They are smit marks and farmers have been using them for hundreds of years to identify who sheep belong to.

A daub of paint – perhaps two marks of red or one of black – nearer the haunch or the shoulder. From these a farmer knows which are his sheep and which belong to his neighbour.

You can read more in this article about Smit Marks. 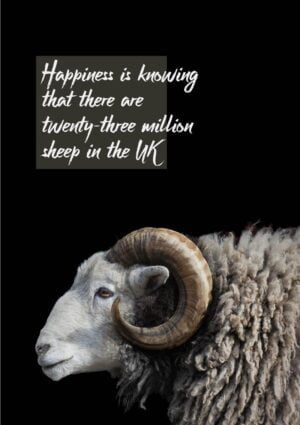