Skip to content
Here's a reminder that Sunday, 14 March is Mother's Day. Click the link for the cards.
View basket “Tulips” has been added to your basket.

Gladioli is a sympathy card featuring white gladioli with text ‘With Sympathy’.

The name comes from the resemblance of the leaves to swords. For those with a command of Latin you might recognise the word gladius, meaning sword. And for the rest of us we surely know the word gladiator, which is a derivative of gladius. Actually, the connection to a sword is more than simply a resemblance. As anyone who has handled the leaves will know, the edges are quite sharp. In fact, they can easily cut a finger if one draws one’s hand along an edge.

Like crocuses, these flowers are members of the iris family. Like irises, they share the growth habit of being perennials that grow from corms. Corms are fat, round, underground tubers that feed plants so they can survive winter. As you might have observed, gladioli (like crocuses and irises) like damp conditions, so corms also help in times of drought. 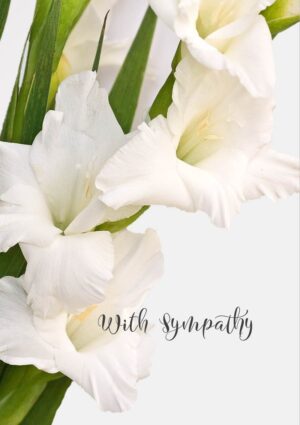