A Koi Carp greeting card for every day featuring two koi seen from above. They are multicoloured, in red, orange, white, and black. Their sleek bodies slide through the water and a dorsal fin just breaks the surface of the water.

In case you are not familiar with the dorsal fin, it is a fin that sticks vertically upward on the back of most fish, whales, dolphins, and porpoises. Most species have a single dorsal fin, but some have two or even three dorsal fins.

The word koi comes from Japanese, and it means carp. So Koi Carp is really just a repetition of the word, like saying carp carp.

In Japanese, koi sounds like another Japanese word that means affection or love. For that reason, they symbolise love and friendship.

As you might have guessed because of the similarity of appearance, it was selective breeding of carp in China that led to the production of the goldfish. That is, they were first bred for colour mutations in China more than a thousand years ago. And because koi are cold water fish, they could be bred selectively in lots of environments.

In consequence, it was by selectively breeding the Prussian carp that people were eventually able to produce the goldfish. If you are like me, perhaps you too find it odd that goldfish were produced in this way and did not simply evolve naturally? That is to say, without intentional breeding there would not be any goldfish. 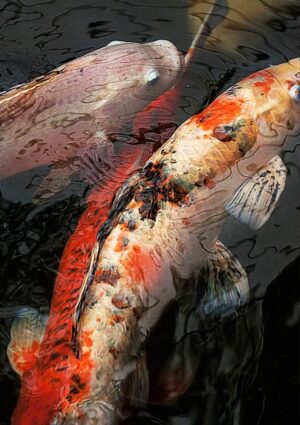