A card for friendship featuring a zebra in black and white and text ‘Can We Make Up?’ and ‘Not Everything Is Black And White’

Make Up is card for friendship featuring a zebra in black and white and text ‘Can We Make Up?’ and ‘Not Everything Is Black And White’

We know that life cannot be reduced to generalisations. And we know that is especially true in personal relationships. Furthermore, we understand that there is so much that each person brings to the interactions. Therefore it is almost always never the case that things are black and white.

And yet, strange creatures that we are, we behave otherwise. Time after time we behave as though things are indeed black and white. And we do so even while at the same time doubting our position.

There’s a scene in the film First Man about a group of men in conversation. They are a tightly knit group of outstanding men. They are outstanding in that they have been through physical and psychological training that sets them apart. Specifically they are being trained to be astronauts preparing for a moon landing. In the scene, they are reflecting on the death of one of their number in a hazardous experiment.

One of the group makes an adverse comment about the person who died. The others look at him disapprovingly and he responds that what he said is what they all thinking. To which one of the others replies that that might be so, but just because it is true doesn’t mean one has to say it.

Such is life. And perhaps the lesson there is that part of how we make up is what we don’t say as much as what we do say. 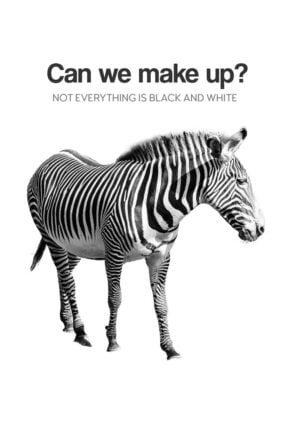