Free UK delivery on orders of four or more cards.

Obliged – a Thank You card featuring a horse leaning over a wall and a speech bubble and text ‘Much Obliged!’

Much obliged is a thank you card. Admittedly, the words are spoken by a horse. But what is clear is that the words that are more than a simple thank you.

The words have become synonymous with thank you. But there is also the echo of a deeper sense of obligation and indebtedness. There is a sense in which the person offering the thanks feels that the other person has gone above and beyond. They have gone above and beyond in whatever the situation is and whatever the other person did. So now the person receiving the benefit is accountable to the other and must say more than thank you.

The origin of the word is Latin and means to bind up or to bandage – and from there to the idea of binding someone to a promise or to make someone indebted by conferring a benefit on them.

Another Sense Of The Word

There is quite another tone in the use of obliged when asking the other person to do something. For example, image if someone were to say “I’d be obliged if you would finish the job as soon as possible,”. There is something else contained in that statement. We understand there is a sense of requiring the other person to do something. And until it is done, the person wanting the work done will not be happy. If the work is late, that person will be most unhappy. One could say that the phrase carries a peculiarly English sensibility. It seems to be civil and yet it is also demanding. Failure will bring down the opposite of thanks.

Yet another sense of the word is when one feels obliged. One might feel obliged to offer a tip to a waiter. Or one might feel legally obliged (or obligated) to do something. In that case the sense if of a forced obligation. One can perhaps sense some slight resentment at being obliged to do whatever it is that is required.

So obliged has many nuances, but here in our card we have the nicest sense. It is the happy and convivial sense of thanking someone for going above and beyond. 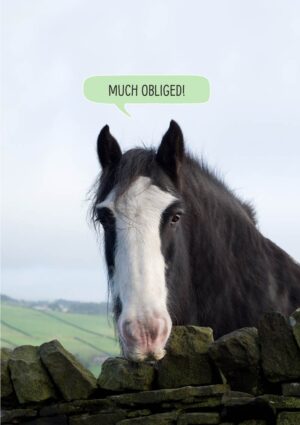