A ‘Ration’ Anti-Brexit Greeting Card – a satirical greeting card to support the No Brexit, anti-Brexit movement, featuring a mockup of a ration book styled after a World War II ration book, and issued by the Brexit Emergency Food Office (with a typo signifying the utter mess of the Brexit plan).

Ration is an anti-Brexit satirical greeting card featuring a mockup of a book styled after a World War II ration book, and issued by the Brexit Emergency Food Office (with a typo signifying the utter mess of the Brexit plan). The text reads as follows. “your ration book issued to guard your food supply. This book is the propery of the Brexit emergency food office post-Brexit ration book.Serial number of book 796285. If found, please return to your local food office.”

The Government introduced rationing in Britain during World War II. And it did not end fully until 1952. As one might expect for an island off Continental Europe, Britain imported a lot of foodstuffs. That included most of its fruit, cereals, sugar, cheese, and meat.

The need to control how the food supply was distributed in the country arose out of the risk to shipping. Ships making the Atlantic run were prey to German U-Boat. Wolf packs, as they were known, hunted cargo ships in the Atlantic ocean. In consequence, imports were under strain. Out of necessity and in response, Britain imposed rationing on the civilian population. Once the system was in place, then in order to buy those items a person had to register at specific shops. And they had to use their book to buy the goods. Apart from the black market in contraband goods, that was the only way to buy essential foodstuffs.

With the transaction concluded, the shopkeeper would stamp the book. In effect, that signified that the customer had collected the item. Most importantly, some people said they ate more healthily during the war than in peacetime. That was because the Government worked out the elements of a healthy diet and imposed that across the board.

Again because Britain is an island, fish was not rationed. But fishermen risked their lives to bring in the catch and people in Britain though highly of them on account of the risks they ran. 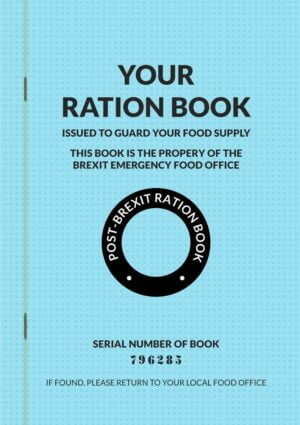