Sky One is a Valentine’s Day Card with hand drawn skyscrapers in various colours. On top of the building there are giant letters on a framework of steel girders. And those letters spell out to the world ‘Be My Valentine’ The words are writ large because that is the way to do it. After all, as the old adage goes, a faint heart never won a fair partner.

With the sky being so ubiquitous it’s not difficult to think of all those things in which it features.

Lucy in the sky with diamonds

Let’s run through those that come to mind immediately. We start with the Beatles song Lucy in the sky with diamonds.

Second up is Henny Penny or Chicken Little with its cry that the sky is falling. Moving on we have John Lennon with his famous song Imagine. In it he asked us to imagine that there is no heaven, and above us only sky.

Going back in time we have the story of Douglas Bader who lost his legs in World War II after flying too low his own airfield and crashing. He went on to become a successful escapee from the prisoner of war camp at Colditz. He was immortalised in the 1956 British film Reach For The Sky. The film was effectively a dramatised documentary based on the 1954 biography by Paul Brickhill.

And now we come forward in time and almost up to date with with the James Bond film Skyfall.

Sky One is a Valentine’s Day Card

Coming around full circle we come to the skyscraper in the card. The word skyscraper has many origins. It could refer to an especially tall person. Or it could refer to the topmost sail on a ship. Then in the boom in the expansion of building works in the great cities of the United States, it was used to describe tall buildings. Nowadays the skyscrapers of New York and Chicago face stiff competition with buildings in Shanghai, Mecca, Taipei, and St Petersburg. And that is to name but a few. What will be the cities that can boast the tallest skyscrapers of the 21st century? 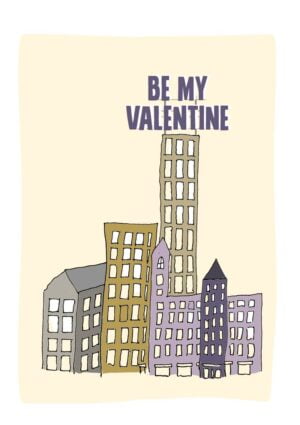