A tiger greeting card for every day featuring a close-up photograph of the head and shoulders of an Amur or Siberian Tiger.

Only 2 left in stock

A tiger greeting card for every day featuring a close-up photograph of the head and shoulders of this magnificent animal.

This is in fact an Amur or Siberian Tiger. It was known as the Siberian tiger until the last of them disappeared from Siberia in the 1990s, and is now known as the Amur tiger.

These tigers are on the Red List for endangered animals. The reasons are the usual suspects. They are losing habitat and they are poached. They are poached for body parts used in traditional medicine in China.

The Amur Tiger From The Amur River Region

You may wonder where Amur is exactly. The Amur River, also known as the Black Dragon River is the border between Russia and China in the east in the area of Inner Manchuria.

An animal is over three metres long, to which you can add another one metre for the tail. And a male can weigh over three hundred kilograms. Females weigh less, and weigh up to 180 kilograms.

Siberian or Amur tigers are distinguishable from other tigers by their striped fur. Those marks are similar to the unique fingerprints that individuals have. That is that no two tigers have the same striped pattern. Siberian tigers differ from other tigers because they have fewer, paler stripes, and they also have manes. You can see the mane in the image in this greeting card, The mane and their thick fur helps keep them warm in the bitter winters of Inner Manchuria.

Siberian tigers are solitary, marking their scent on trees to keep other tigers away from their chosen territory. That is to say that they are not bounded by a home territory and they can roam for miles when they hunt. The prey that they hunt include deer, elk, boar, and bears. And they stalk their prey until they are close enough to pounce from cover. Hunting is an uncertain pursuit, and an Amur tiger can easily eat ten kilograms of foot in one sitting. 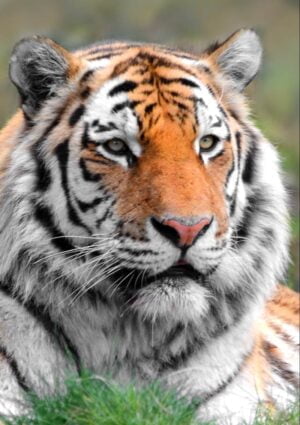