A Birthday card featuring a crested guinea Pig with a speech bubble and text, ‘Happy Birthday – Because You’re Worth It’

Worth It is a Birthday card featuring a crested guinea Pig with a speech bubble and text, ‘Happy Birthday’ and ‘Because you’re worth it’

Ah yes, that phrase. Everyone says it. It was meant as an homage to womanhood, but it became an indictment of ego and privilege. It has been described having come to epitomise the banal narcissism of early 21st century capitalism. To enjoy it one has to enter into a kind of collective narcissism. To cap it all, the hair-swinging gesture was parodied by Miss Piggy in Jim Henson’s The Muppet Show.

Miss Piggy is an interesting character, albeit that she is a puppet. That is to say, she has smarts and savvy, and she struts her stuff. But what is the stuff she has with which to strut? Surely it is not her looks. Try as she might she cannot carry off the suave femme fatale. Nor does she have the constancy of behaviour. When she swans in and leaves a yawning gap between intention and delivery, she flops. But when she is called on it, her voice drops three octaves and she delivers a threatening blow to the solar plexus. No one gets the better of Miss Piggy.

And yet at the same time we have to wonder what she is like in the privacy of her box. Does she cry her eyes out because he is not beautiful, because she is not worth it? Or does she handle it in private in the same way she does in public? In a word, are all of us Miss Piggy to some degree?

With this birthday card, we are however, on safe ground. We are on safe ground because the message is delivered by the most adorable of animals. Guinea pigs, in the power of their defencelessness capture the emotions of love and truth. 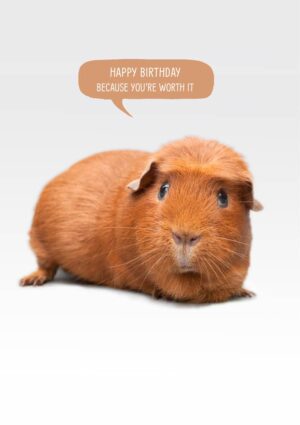