An inspirational greeting card featuring a zebra on a diving board looking down at the water below, with text ‘You Can Do It!’

Dive In is an inspirational greeting card featuring a zebra on a diving board looking down at the water below, with text ‘You Can Do It!’

The origin of the word inspiration is amazing. In the early Middle Ages it described the situation of a person being under the influence. But the influence was not drugs or alcohol. Rather it was the sensation of being under the immediate influence of God. The word derives from the Old French word meaning to inhale or breathe in. Therefore it is easy to see how one can imagine breathing in the heady effect of being aware of God. Going further back in time, the Old French word itself derives from the Latin word meaning to blow into or breathe upon.

And that takes us straight to the creation story. In Genesis we read of God blowing into the nostrils of man and bringing him to life. That is the deepest sense of being under the immediate influence of the knowledge of God.

Now fast forward five hundred years and we have the more general sense of the word. By the mid 1800s the word meant to arouse passion for a purpose in others.

Think about the balance between encouragement and reckless advice? Well zebras can swim, so there is no real danger for it. That is, it can dive in without a problem. However, how far away is the shore? That is to say, will the zebra tire before it reaches land? Encouraging others has to be tempered by responsibility. The person encouraging the other has a responsibility to those whom they encourage.

For anyone who wonders how far the water stretches in this card, we can tell you that the zebra can easily accomplish the task. It just needs a nudge in the right direction. 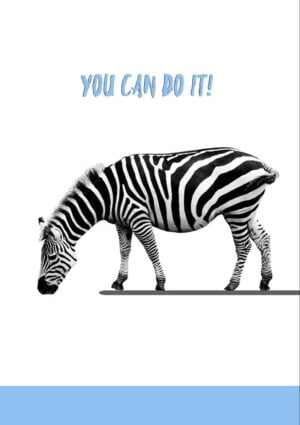