A Congratulations card featuring a llama in profile against a dark background with ears pricked and pointed forward with text ‘Congratulations – as you can see by my ears, I heard your exciting news.’

‘Congratulations – as you can see by my ears, I heard your exciting news.’

Llamas are native to South America but they started life millions of years ago in North America and headed south.

Their nearest cousins are camels. In fact, bactrian and dromedary camels along with the Alpaca, Vicuna, and Guanaco are all members of the family Camelidae.

And that’s the whole family. There are no other members of the family, so the llama’s nearest cousins are camels.

Breeders in Dubai are experimenting with cross breeding a camel and a llama. The offspring is called a Cama. What if the offspring is fertile? What new animals might appear down the line?

Here are some interesting facts about llamas. First off, female llamas do not release an egg each month. Rather, they only release an egg in response to being impregnated. The ‘egg-on-demand’ system means that llamas usually get pregnant on first try.

Another animal that releases an egg in response to mating is the polar bear – but that’s another story.

And here’s something to picture – llamas mate lying down.

And llamas spit. They spit to chastise other llamas lower down the social order. They rarely spit at humans. 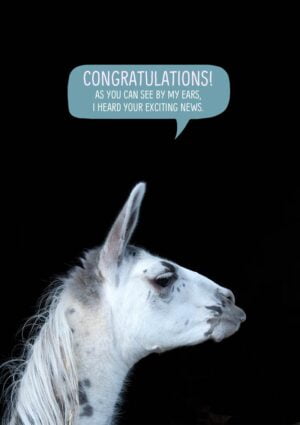