Our cards are printed in the UK on high quality card stock,
and our posters are printed on museum-quality matte paper.

A card for every day featuring a Herdwick ram in profile showing its magnificent horns.

A card for every day featuring a Herdwick ram in profile showing its magnificent horns.

What a wonderful animal is the Herdwick. They have magnificent coats with a lovely mix of gray, white, and brown wool. They are described as being hefted to the hill on which they are raised, which means that they know their home and will not stray from it.

The Herdwick owes its survival to Beatrix Potter,the internationally known children’s story writer and illustrator, and creator of the character Peter Rabbit.

She had flocks of Herdwick and was a keen supporter of the Herdwick breed of sheep and helped save it from extinction. She left her farms to the National Trust on condition that the trust continued to breed and keep these sheep.

This was part of her wider vision to preserve that part of England known as the Lake District. She wanted to preserve it from irresponsible development and ensure that so far as possible it would continue to be farmed in the way that had shaped its landscape over hundreds of years.

Part of what formed her vision is the contact she had with the founders of the National Trust, an independent charity formed in 1895 and dedicated to the preservation of the English countryside.

She and the Trust worked together, including farming some farms jointly to prevent them being broken up.

Beatrix Potter died in 1943 and at the time of her death she owned several farms in the Lake District with a combined size of more than 1,600 hectares (4,000 acres). Following the death of her husband in 1945 she dedicated her farms be left to the National Trust after her death.

In 1951 an area of 2,230 square kilometres (885 square miles) was dedicated as the The Lake District National Park, ensuring it would be preserved from development.

She bought Troutbeck Park Farm in the 1920s and built up a flock of over 1,000 Herdwick sheep. She did in part because she felt they should be preserved as a breed because they were indigenous to the Lakeland fells with a history going back hundreds of years.

Herdwicks were under threat because they are slow growing sheep which give birth to fewer lambs than lowland sheep and therefore struggled on the balance sheets of working farmers against the advantages of other breeds.

Following her death the farms she owned and her Herdwick flocks were endowed to the National Trust with conditions attached to the continuation of the Herdwick breed.

The outbreaks of Foot and Mouth disease in England in 2001 put strain on the viablility of the breed. It made the conditions attaching to Beatrix Potter’s endowment to the National Trust an important factor in maintaining Herdwicks as a breed. 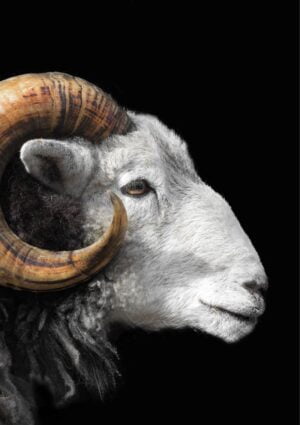