Skip to content
Buy four greeting cards and get free delivery within the UK.

A Congratulations card featuring an owl wearing a pair of spectacles, with speech bubble and text ‘Well Done’

Spectacles is a congratulations card featuring an owl wearing a pair of spectacles, with speech bubble and text ‘Well Done’

As you might have guessed, the owl was not actually wearing the spectacles. Rather, I photographed the glasses from what seemed to be the correct angle. Then I added them on a layer in Photoshop and blended them in to merge with the owl image that was on the layer below.

Where did the owl get its reputation for wisdom? Well its association with Athena, the goddess of wisdom in Ancient Greece testifies that the association is a long one.

Beyond that, no scientific reason has been found. Owls are not as smart as crows, for example, according to tests. But then, it is we humans who devise the tests, and perhaps the wise old owl doesn’t want to play along.

One thing you may not know about owls is that their ears are not symmetrical. You know how a person might cock their head to one side to detect from a where a sound originates. Well owls go one stop further ny having one ear set higher than the other. That enables them to sit with their head upright, and detect from whence a notice originates.

Another interesting phenomenon is the way temperature affects balance. Pour warm water into one ear and the world will start to spin in one direction. That is because the heat excites the semi-circular canal and the brain interprets this as movement happening around it. Pour cold water into the ear and the word will appear to be moving in the opposite direction. 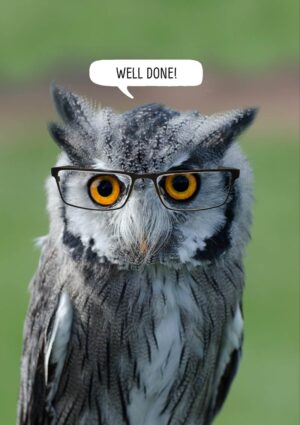