A card featuring a blazer in pale blue and white vertical stripes set off against a tie with red and blue horizontal stripes.

A card featuring a blazer in pale blue and white vertical stripes set off against a tie with red and blue horizontal stripes. They carry it off with panache, and while style is in the eye of the beholder, this arrangement is certainly striking.

How many things can you think of that are associated with the word stripes?

Let me think. A quick rummage around my brain brings up striped jackets and ties of course like in this greeting card.

Then there are the stripes running down the seam of the trousers of a military uniform. I don’t know what made me think of that other than ‘The Night Of The Generals’ – a wartime film with Peter O’Toole that you can see on repeats on TV from time to time.

There are the stripes on a zebra or a bongo and on many other animals and birds.

There’s striped deckchair material. I wonder who thought of using that pattern and how it caught on to become the de facto design used everywhere? 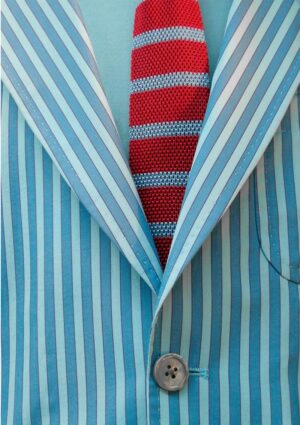