A jaguar greeting card for every day featuring a jaguar taking a nap with its head resting on a log.

A jaguar greeting card for every day featuring a jaguar taking a nap with its head resting on a log.

The name jaguar is enough to send a tingle down the spine. The clue is in the name. In the native American Tupian language it means beast.

With a territory stretching from the Southwest United States, all through Central America and down as far as Argentina, you would think it is doing pretty well in the wild.

In fact, its numbers are declining and it is near to being on the endangered animals list.

It might be that its habit of ambushing its prey has singled it out to be feared and hunted. And of course there is the loss of habitat from which all animals living in the wild suffer. When will it stop? When will the values we aspire to be carried through to the actions we take so that animals are respected and given space to live and to breathe as befits them?

Here it is resting: Life is good and it’s time for a nap. 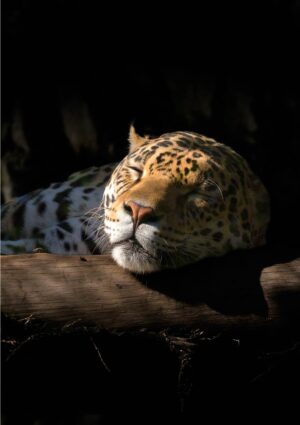