A greeting card for every day featuring a photo of a boulangerie in Paris.

Boulangerie is a greeting card for every day featuring a romantic bakery in Paris. The etymology of the word is interesting because of course, the French word for bread is pain. And that bears no resemblance to the word boulangerie.

The word boulangerie means ball or bun and traces its meaning back to an even older word meaning to swell or to inflate. So a boulangère was a bun maker. And to be entitled to be called a boulangère in France, the baker must bake bread on the premises.

Plainly that means there must be an oven on the premises. Now the French word for oven is fournil, and the oven is usually located in the room where the baker works with his or her dough.

That raises the question of why the words Fournil de Village are above the door of this shop. After all, the word boulangerie includes the idea of an oven on the premises in which to bake the bread.

To be boulanger (masculine) or a boulangère (feminine) a baker in France must be a master. Specifically he or she must master the art of working with warm dough. He or she has to master the technique of making the dough rise with large holes as in a baguette or smaller holes as in pain de campagne.

A boulangerie may also sell pâtisseries and viennoiseries, but their main business will be in baking and selling traditional French breads, such as baguettes and pain de campagne.

In case you are wondering, the word bakery itself is also feminine – so la boulangerie.

The Origin of The Word Pain

As we have said, the word boulangerie means ball or bun. And as we have said its meaning can be traced back to an even older word meaning to swell or to inflate. So now the connection and the derivation are easy to understand. Except where did the word pain come from?

Pain is Old French, and before that from Latin pānis, meaning to feed, or to graze. And that makes sense because bread is a staple, as in give us this day our daily bread, or our pain quotidian. 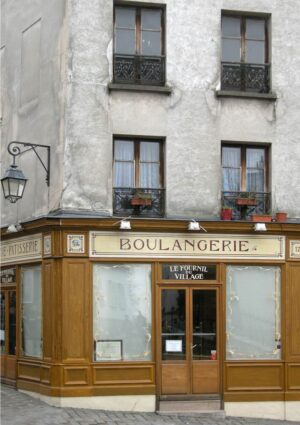