The Bali Starling is native to the island of Bali in Indonesia, and is called Jalak Bali by the local population.

Then it was ‘discovered’ by the British ornithologist Lord Rothschild in 1910, and in international ornithology one of the bird’s alternative names is Rothchild’s Mynah.

It has been the national symbol of Bali since 1991 but they are almost extinct in the wild due to illegal trapping for the caged-bird trade. It’s easy to imagine that there is a national embarrassment over the fact that the national bird is almost extinct.

The situation was so back that in 2001 there were only six birds known to be left alive in the wild.

Thankfully, since then it has been saved from extinction by a number of conservation projects and it is making a comeback from the brink.

Whatever the situation of the bird in terms of numbers, the thing is that it’s a beautiful bird. With its white body and blue eye surround, it is very pleasant indeed to look at. That’s what makes the Bali Starling greeting card a pleasure to give and to receive. 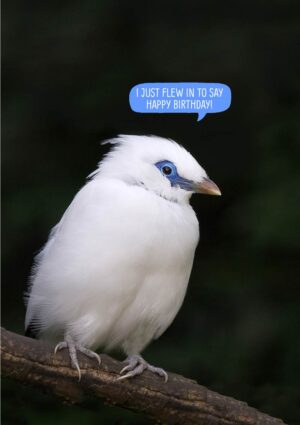