A Do Your Bit greeting card to support the No Brexit, anti-Brexit movement, styled after a World War II Ministry Of Information poster.

A Do Your Bit greeting card to support the No Brexit, anti-Brexit movement, styled after a World War II Ministry Of Information poster. It requires people to report to their nearest labour office because there is fruit rotting in the fields. The reason fruit is rotting in the fields is because no one is there to pick it.

We made this card long before Brexit happened. The referendum had happened but the eventual outcome was not certain. That is, would we or wouldn’t we actually withdraw from the EU? Would there perhaps be a second referendum?

However, it didn’t take much imagination to understand that if Brexit happened, certain endeavours would be in trouble. Among them we saw manual labour in the fields and nursing in hospitals. The staff at our local hospital are from all over Europe. They are absolutely essential to the running of what is a world class hospital. If they had to go, the hospital would be empty. And so it was (and is) with the seasonal crops that needed to be picked in the fields. How could any Government be so blind as not so see the truth.

Do Your Bit Picking Fruit

The truth was that the great British public were unlikely to want to spend a season in Lincolnshire picking fruit or lifting vegetables. We wondered whether perhaps the Government would alter the benefit rules to make the unemployed have to work to keep body and soul together. And if that didn’t work then perhaps they would enforce mandatory fruit picking. It would be just like wartime. Except is was peacetime and the wounds were self inflicted. Be that as it may, that was the inspiration for this card. And here is the text that says what every man and woman of a certain span of years must do.

There is fruit rotting in the fields! Following the withdrawal of the United Kingdom from the European Union, and pursuant to Order in Parliament, the Ministry Of Labour is directed to require all men and women between the ages of 15 and 55 to report to their nearest Labour Office. Your Country Needs You. Do Your Bit! 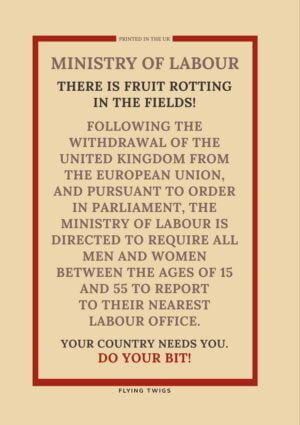