Who doesn’t like cafes? Light meals and snacks are the meals that we eat, far more than full-blown meals in fancy restaurants. A cafe is a place where we can kick back and relax in modest surroundings. Who cares that the cutlery is in a tin can, as long as it is clean? We like it that way.

We have written an article here on Flying Twigs about the word ‘cafe’. Specifically we have written about how the word came to be used to mean a place where one could get a light meal.

As we explained, it starts with coffee. It is native to the highlands of Ethiopia and spread to the Middle East and Turkey.

In 1529, the Turks lay siege to Vienna. They didn’t succeed in taken the city but they came back 150 years later to try again. Again they failed and again Vienna breathed a sigh of relief.

This time though, the Turks left coffee behind in their abandoned baggage. Soon, trade opened up and cafes opened up in Europe. You can read more about that journey in this article about from coffee to cafe.

The first recorded use of the word cafe in the coffee houses of Europe was in the 1770s. Coffee was new and expensive, so the idea of simply drinking it on its own was unthinkable. To do it justice, it had to be taken with food. Therefore at that time the word cafe meant a light meal at which coffee was served.  Then in the nature of things, time  elapsed and coffee became more affordable. And as that happened, fashion moved on until the word cafe came to be used as the name of the establishment itself.

And that is the story of coffee and cafe. 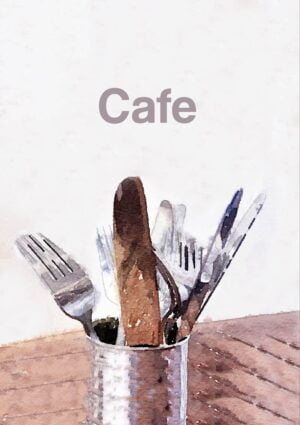