Skip to content
Buy four greeting cards and get free delivery within the UK.

A Mother’s Day card featuring the Houses Of Parliament and Big Ben viewed from across the River Thames in London. Ant to top it off, there’s the text ‘Happy Mother’s Day’ and lots of speech bubbles with  ‘Hear Hear’.

Clapping or other kinds of applause in the Houses Of Parliament are normally forbidden by tradition during debate.  Instead, as we know, the members say it to voice their approval. Depending on the tone and enthusiasm with which they say it, the expression can also mean more. It can mean that they not only approve of what the speaker said, but that they think it is well said.

Outside of Parliament the phrase is often used ironically. It’s a way of expressing that one is not in sympathy with what is being said and doesn’t think much of it. The beauty of the use of the phrase is all the tone of voice. And that goes to illustrate how important it is to be able to listen to the words spoken rather than only seeing them in print. That is, unless something along the lines of “he said ironically..” are also there to guide the reader.

The Use Of The Word Historically

The phrase came from an earlier phrase ‘Hear him!’, the use of which dates back to the 1600s. Of course the word used as an imperative dates back further than that. It is in Deuteronomy (Devarim) 6, in the Old Testament where is appears as ‘Hear, O Israel: The Lord is our God; the Lord is one.’ The word is used as a command rather than a plea, and commands the people to acknowledge that there is one universal God behind everything for everyone. And it is in this 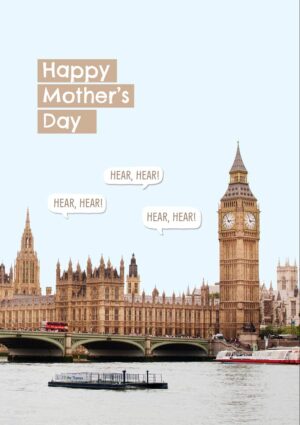