A Congratulations card featuring a Great grey owl with its characteristic look of being mightily impressed, and text ‘Well Done’

Well Done is a congratulations card featuring a Great grey owl with its characteristic look of being mightily impressed, and text ‘Well Done’

Don’t you think this owl looks like a piece of wood or a tree trunk? Its face looks almost beyond belief with its round face and staring eyes.

The great grey owl is the biggest owl by length. There are other owls that are heavier, but this is the longest. In fact though, although it is the longest it doesn’t weigh very much because most of it is feathers.

That is to say, on average a female weighs about one-and-a-quarter kilograms. In contrast, males only reach a kilogram in weight. That difference in weight is typical for owls, where the female weighs more than the male.

All Around The World

Above all, what makes it unusual is that is found all around the world. That is to say, it is found north and south of the equator. In the Northern hemisphere it breeds in coniferous forests in the taiga. Its range is from Scandinavia, Finland and the Baltic countries across to Asiatic Russia.

Meanwhile, in the Americas it breeds as far south as the region in which there are mature oak forests. Most noteworthy, it was only recently that was it understood to withstand the warmth of California summers. That’s quite a feat for a bird that seems designed for the cold north.

And it has a distinctive call of very deep whoo that it makes to demarcate its territory. With a bit of poetic licence one could imagine it saying ‘Well done’. 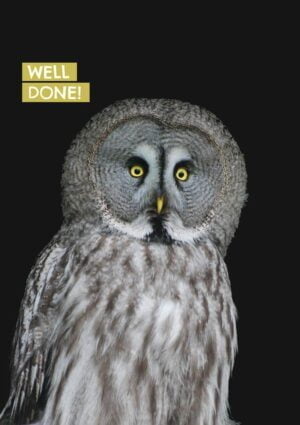